Vectors can also be used in three dimensions. This requires three mutually perpendicular (orthagonal) axes, as shown below.

The x- and y-axes are usually shown horizontally and the z-axes is vertical (upwards).

The position of a point can be given using three coordinates (x, y, z). 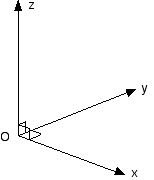 Representation of Three Dimensional Vectors
In three dimensions, the position vector p can be shown as

are the basic unit vectors in the x-, y-, and z-directions. 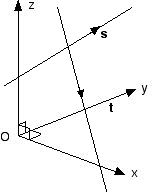 Vector s is behind vector t.

Multiplication of a Three Dimensional Vector by a Scalar
A vector can be multiplied by a scalar or constant. Each component of the vector is multiplied by the scalar.

The vector ka is the vector a multiplied by the scale factor k.
It is in the same direction as a and k times the magnitude (length).

Length of a Three Dimensional Vector

The length of a vector is called its magnitude.
If

This property can be shown using Pythagoras' Theorem.

Addition and Subtraction of Vectors
Vectors can be added and subtracted in matrix form by adding or subtracting corresponding elements.

Vectors may be added using vector triangles.The second vector is added on to the end of the first vector. Note that the arrows on the two vectors being added go in one direction around the triangle and the arrow of the resultant vector goes in the other direction.

When subtracting, using a diagram, add the opposite or inverse matrix. a − b is drawn as a + (-b).