The following table shows the sales in millions ($) year period of a company.
The moving medians (order 3) are calculated by:

Note there will not be a moving median for the first and last values
The graph of the original data and the moving medians is shown below:

The long term trend can now be seen more clearly.

There are three possibilities:

In the case above there would appear to be a increasing or additive trend.

Moving mean − even number of cycles
The data below shows sales of a company for two years.
As the data is obviously seasonal, arranged in 4 quarters each year, then the data should be smoothed using groups of four.
The moving means are worked out in a similar manner to the moving medians.
i.e. 31.75 is the mean of 27, 45, 34 and 21.

The problem now is where to put the moving means!

Using a Spreadsheet for Smoothing

From the smoothed graph the upward trend of increasing sales can be clearly seen.

When the data has been smoothed and trends analysed, each value can be looked at for seasonal effects. This is to see if the values are significantly different from what might be expected and to help make predictions.

To show how this works, the bicycle company's figures will be used. As the data is for days of the week a moving mean of 7 is chosen.

Interpretation of Adjusted Values
A seasonally adjusted value is more than expected if it is above the corresponding moving mean value.

To predict values in the future from existing time series data requires the calculation:

The estimated moving mean in the formula above can be worked out in several ways.

1. Use the table above to work out by how much the moving mean is changing each day.

To predict the value of the fourth Saturday, assume that the moving mean will continue to decrease by about 1 each day as in the table.

2. Draw a graph of the moving means and insert a trend line. Use the gradient of the trend line to predict future values: 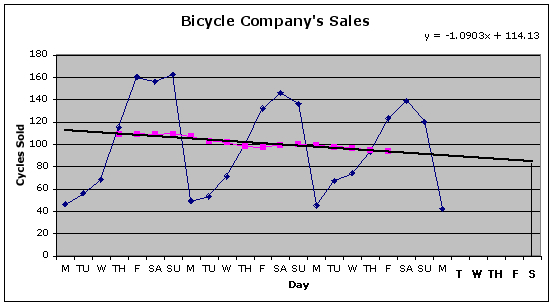 The trend line has been extended to go to the next Saturday. Using the graph the number of cycles sold on the final Saturday can be estimated:

The equation of the trend line can be worked out from the graph or calculated by the spreadsheet, as above. This equation is used with an x-value equal to the number of time periods. In the graph above, there are 27 days therefore x = 27.